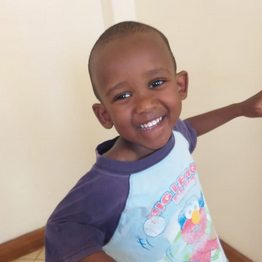 Gean Chege, a young boy in the Kiandutu slum, is another example of Jiamini's important work.
Gean was just 6 months old when he was abandoned in the middle of the slum during the rainy season. Neighbors called Jiamini for help. In addition to their work with the Jiamini children, the employees at Jiamini also take care of such acute emergencies.

Completely soaked and occupied by many flies, Stanley Kibue took the little boy to the Jiamini Center.
After much research and consultation with the authorities, it was clear that Gean could not be raised by his parents or relatives. A new home had to be found.
As the Jiamini CBO is well networked with various facilities and other organizations on site, an orphanage was quickly found.

However, Gean's social responsibility and assistance is not over yet.
Gean is regularly visited by Stano. He checks his well-being and his development. Jiamini is also in contact with the authorities to find possible offers of help for Gean's mother. We hope that you will soon be able to take care of your little boy again.