During Alexandra's visit to Kenya, she noticed the poor condition of Kefa's home. Kefa has been supported by Jiamini for a long time and is currently attending primary school. Like all Jiamini children, he sleeps with his Guardian. In his case, it's his aunt. She lives in the Kiandutu slum and owns two small clay / corrugated iron huts for herself, her daughter and Kefa. The one in which Kefa sleeps in particular was badly damaged and let rain and dirt in unhindered. Because of the aunt's financial difficulties, Jiamini decided to pay for the repairs. These have now been completed, which means that Kefa is again more secure from rain, dirt and crime. 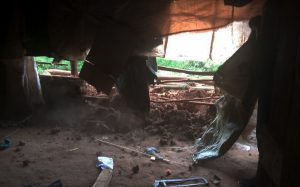